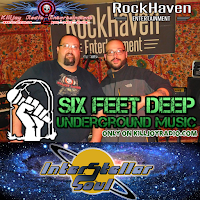 Take a cosmic trip through the musical cosmos with Interstellar Soul. Ernest Douglas is no stranger to Killjoy Radio he was on the second episode of Killjoy Radio back in February 2014. The band has evolved a bit since then, but they have retained their unmistakable funk, soul, blues, jazz sound with a jagged rock edge. Interstellar Soul is a 3 piece (soon to be 4 piece?) sucker punch to the face - the groove hits you fast and lingers for the rest of the day.

From www.Interstellarsoul.com :
Interstellar Soul is an alternative soul band from the suburbs of Baltimore, Md. The Trio uses their independently acquired skills t 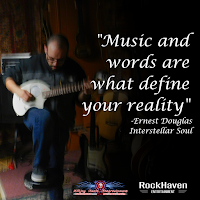 o bring their unique soul sound to the Baltimore scene. Fusing their love of soul, blues, rock, alternative, trance, and anything else that inspires them, they aim to push the genre lines out of music. With over 40 years of experience between them, experience and talent are two things they do not fall short of. The band got its start in Ellicott city, Md where Guitarist/Songwriter Ernest Douglas met bassist Gregg Gaither. The two jammed on and off again for a number of years before meeting and joining forces with percussionists Rodney Moore. The trio have made their way around Md, Va, PA, and WV, gaining the respect of their peers as well as the love of the crowd. After a few months of rehearsals, the group headed to Wright Way Studios in Baltimore, Md to start work on their debut album "Soul Brothers" with Engineer Drew Lamond, which was released in June of 2014. The group brought in drummer Cheech Barry after Moore relocated with his family to the west coast. The group now focuses on expanding their reach and style by touring in the summer and working with members of the  soul scene. They know what they want and will press on until they have it!


One of the things I love about hanging out with Ernie is that he's so down to earth and that's reflected in his songwriting. Lyrically driven by "real shit" the songs are easy to relate to and get lost in. In fact, it's so easy that I listened to "Chased my Girl" 6 times, getting sucked in by that killer bass line, that I didn't even hear the lyrics until I had to go back and listen because I couldn't figure out which song it was. The line "I made a mistake, I chased my girl away" was a dead giveaway but I'm an idiot.