I’m sure crazier things have happened down in RockHaven Studios, but I sat down with the guys from Fire in Elysium and it was a wild night. From homophobia and phony Mexican prejudice to dick jokes and fatherly bonding, this episode of Six Feet Deep – Underground Music is one of our funniest yet.  The non-homosexual bond that these guys have given you the sense that Fire in Elysium is more of a family than a band – and having a father-son duo in the band doesn’t hurt either.

Meet Brian, Scott, LBJ, and Miguel of Fire In Elysium. This 5 piece metal monster will kick your ass, pick you up, give you a big hug, spit gasoline in your face and set it on fire. They combine their original sounds and combine it with a heavy, energetic stage presence and that my, friends, is the recipe for face melting metal. Brian, Scott, Miguel, and LBJ – where’s the 5th member? Well that Lewis and we’ll get to why he’s not here in a minute. Coming off 3 weeks of shows they group (or at least 4/5th) of them are preparing for their upcoming shows NOV 21 at Casey’s Music Alley and Nov 25 @ Memories Bar in Waldorf. As they work on new music be sure to catch shows as they come up. Speaking of coming up, I also hear there’s an all mall live sex show in the works called “The Kong of Dongs” stay tuned for more information on that.

Fire In Elysium is composed of a crazy group of guys. Scott likes to beat n his drums the way he beats his meat – forceful and aggressive. On guitar we have the luchadorian prodigy, Miguel. After being smuggled in a crate of oranges leading to many failed mariachi gigs, he finally settled down with Fire in Elysium where he shreds his guitar while his ancestors shred  Mexican fields into tortillas.* While most fathers bond over hunting on hookers, Brian & LBJ have bonded over their love of music and metal. Brian plays guitar and Keys while LBJ lays down the Bass. And finally we have Lewis on vocals…he couldn’t make the interview because he was working at Burger King….or was he? We called Burger King to try and catch him and work and HE WASN’T THERE! Dude got off early and decided to hit the gym instead coming to the Interview. WTF RIGHT?!? It’s all good, we finally got a hold of him and got him on the show…I just can’t guarantee he still had a job in the morning. 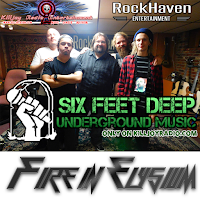 We had an excellent time at Rockhaven Studios. Fire in Elysium are the real deal when it comes to Baltimore Music with some of the best music to come out of the local metal scene. Be sure to check them out on the internets:

*I apologize to all the Mexicans that I’ve offended with this joke. Miguel is not actually Mexican anyway. But here is a video of a Mexican Luchador “Wrestling” with himself. WARNING ONCE YOU WATCH THIS VIDEO YOU CANNOT UNWATCH IT. That being said, enjoy: http://www.pornhub.com/view_video.php?viewkey=1413881755